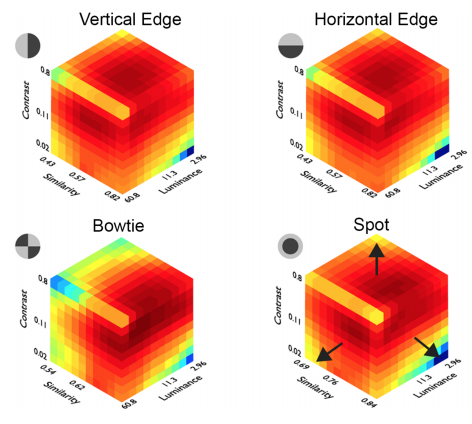 Detection of target objects in the surrounding environment is a common visual task. There is a vast psychophysical and modeling literature concerning the detection of targets in artificial and natural backgrounds. Most studies involve detection of additive targets or of some form of image distortion. Although much has been learned from these studies, the targets that most often occur under natural conditions are neither additive nor distorting; rather, they are opaque targets that occlude the backgrounds behind them. Here, we describe our efforts to measure and model detection of occluding targets in natural backgrounds. To systematically vary the properties of the backgrounds, we used the constrained sampling approach of Sebastian, Abrams, and Geisler (2017). Specifically, millions of calibrated gray-scale natural-image patches were sorted into a 3D histogram along the dimensions of luminance, contrast, and phase-invariant similarity to the target. Eccentricity psychometric functions (accuracy as a function of retinal eccentricity) were measured for four different occluding targets and 15 different combinations of background luminance, contrast, and similarity, with a different randomly sampled background on each trial. The complex pattern of results was consistent across the three subjects, and was largely explained by a principled model observer (with only a single efficiency parameter) that combines three image cues (pattern, silhouette, and edge) and four well-known properties of the human visual system (optical blur, blurring and downsampling by the ganglion cells, divisive normalization, intrinsic position uncertainty). The model also explains the thresholds for additive foveal targets in natural backgrounds reported in Sebastian et al. (2017).